I should preface this with: Oballs are my favorite early infant toy (2-6 months). My daughter could grab them before any other toy. She picked up and tried to gum her Oball shaker before she made 9 weeks, and it was the first time I saw her actively interact with a toy. There is something about the plastic mesh that makes them really easy to hold for even the tiniest of hands.

My least favorite things about Oballs is they are annoying to clean.  It never feels like a wipe down can cover all the angles of the mesh.

We started out with the Oball shaker, but quickly ordered the Oball Jingle and Shake Pal and the Oball Rollin’ Rainstick Rattle once we realized how well she could grasp them. 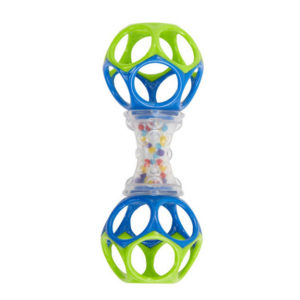 The good- Super light and portable. The smaller plastic webbing makes it easy for little fingers to grab. It has become a staple throw in for our diaper bag.

The bad- The “shake” in the shaker is a bit of a let down. It is so muted that our daughter hardly responds to it. 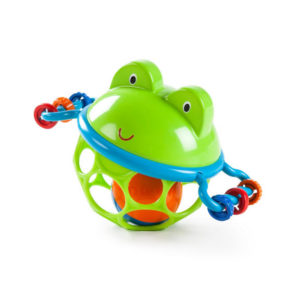 The good- Pretty light. Good sounds. The beading on the handles is a nice touch. My daughter is amused by the “froggy” like face

The bad- It is top heavy, so it only rests on its own face. The top-heaviness also makes it hard for my daughter to manipulate it in the way she wants to, which frustrates her at times. It is also bulky to pack. 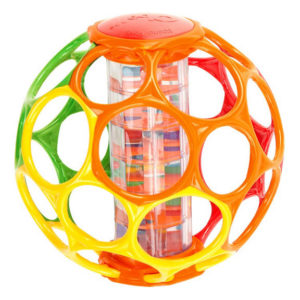 The good- Great and loud sounds. My daughter’s smallest movements can cause a sound. The sounds are also pretty sensorily pleasing, which I appreciate.

The bad- This ball was bigger than I expected. My four-month-old can drag it, but can’t really pick it up. Her hands can also fit inside the plastic mesh, which infuriates her.

Overall, I haven’t met an Oball yet I haven’t liked, but they do have some design flaws.