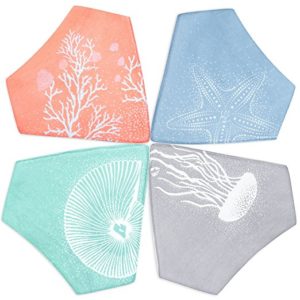 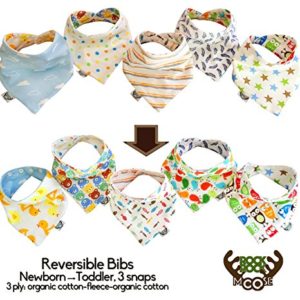 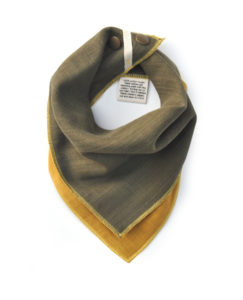 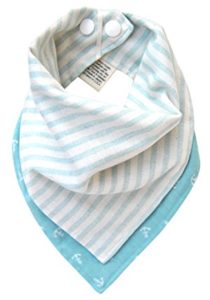 First off, I LOVE bandana bibs. I think they are so trendy and I love the shape they make when on my daughter. I also feel like they add flair to any outfit. I decided to do this comparison to find bibs that would be beautiful, trendy, durable, and absorbent.

I acquired bandana bibs from four leading companies to do the comparison. All of the companies had great customer service and were very helpful in the ordering process.

Rock Rock Moose has three layers, two layers are soft organic cotton over absorbent fleece. I LOVE the fact that the fleece is surrounded by breathable cotton so my daughter isn’t touching anything that is non-organic. They are also SUPER absorbent. I would rather use these then a burp cloth usually.

Kishu Baby is not very absorbent, and ultimately are better for drool than any major spills.

Both Kishu Baby and Rock Rock Moose are completely reversible, doubling the options!

Kishu Baby is definitely the breeziest of the of the bandana bibs. They are lightweight cotton muslin imported from Japan and it shows. They are so beautiful so airy for summer.

Beechtreebaby and Copper Pearl are the next lightest, with Rock Rock Moose being the warmest of the four.

Winner- Kishu baby bandana bibs are so trendy. They have the cutest look when on and the color combinations are really on trend. I like that there weren’t just “baby” our “child” prints to choose from, but there were so many prints and color combinations that I would wear. With their color choices I wish they made baby clothes as well!

Beechtree Baby and Copper Pearl are both really trendy as well. Rock Rock Moose has much more traditional prints for baby.

Copper Pearl has an overwhelming amount of choices. There are really beautiful, but they are also super gendered or gray.

Beechtree baby has SO many options to choose from. My favorite is the Snorkeling set, but all of their sets are really beautiful. And not gendered at all.

Kishu Baby sells individually and there are plenty of patterns to choose from. They are also reversible

Rock Rock Moose has the least patterns at only 5 in a set, but they are all reversible

Beechtree Baby sells a set of 4 beautiful bibs for $19.95 with shipping on Amazon for a breakdown of $4.99 a bib

Copper Pearl sells a set of 4 beautiful bibs for $19.95 with shipping on Amazon for a breakdown of $4.99 a bib

I contacted each of the customer service departments and Rock Rock Moose and Beechtree Baby responded within hours to address my needs. Copper Pearl and Kishu Baby also responded within 24 hours, and were helpful as well.

Overall I was most impressed by Rock Rock Moose’s affordability, durability, easy of use, and reversibility.

With that said, each bib company had strengths and weaknesses, and ultimately I would repurchase every bib I received.