Anyone who has ever been in the 3rd trimester can tell you that the combination of hormones and knowing a baby is on the way gives you some wicked nesting urges. These urges combined with my heat blasting made me start wondering how we can best keep our kids safe from our exposed radiators and steam pipes.

I have something in the works for my radiators, but the steam pipes really had me stumped. I found a website (https://www.apartmenttherapy.com/how-to-insulate-hot-pipes-with-rope-15526) that suggested using 1/4 inch Manila rope to wrap it. I did some basic research to see if it was safe and got ready to buy some rope!

Enter Mike from SGT Knots. I wrote SGT Knots, since they are the best reviewed rope company on Amazon and asked if he thought this was a good idea. Surprisingly, he asked me to call him and gave me a great lesson on rope development!

I should start by saying I LOVE SGT Knots as a rope company. Who takes the time to call some crazy pregnant lady when they have a business to run?!

So Mike gave me some great advice:

So Mike got me set up with a less-smelly 1/2 inch Sisal rope and I got to wrapping. He even suggested a great knot to use to tie it off. I cannot say enough nice things about the SGT Knots customer service team. I got 600ft because we have four exposed steam pipes in our apartment, but I think 75 per pipe would get you about 6 feet up, depending on the pipe.

Here is the outcome: 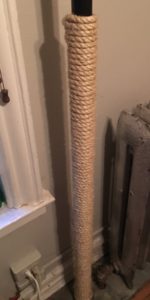 It looked great and the rope was excellent quality. The rope was not stinky at all, until the heat came on. It smelled then, like a hot rope smell. I was very thankful I didn’t get the Manila, but unsure if it was safe to leave that smell in an apartment in the brutal winter when I can’t open all the windows.

I made an executive decision to destroy my hard work and attempt this project again when my family will be away for the weekend and I won’t be developing the brain of an unborn human.

Even though this project is a bust for me at this time, I will never buy rope from any other company than SGT Knots. They were amazing and really went above and beyond to give me the best information and product for the job. I cannot say enough about them. I am so so impressed by their expertise and kindness.

Also, I will complete this project one day when I’m not pregnant and can make sure both kids are out of the house and the house can be aired out! My ugly steam pipes will be beautiful and safe for tiny hands.